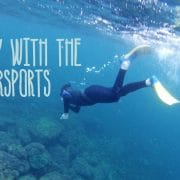 The Watersports Guru is located in Kingscliff just on the NSW/QLD border. It is about a 50 minute drive from Surfers Paradise and providing you have a good gps and the correct address easy to find. I won’t even begin to explain the hassle we had with our gps, needless to say we returned it the following day. We had a full day of activities planned with these guys and that wasn’t even everything they have on offer. Our first part of the day was spent on the boat out at Cook Island swimming with turtles and all other marina life. After a lovely bbq we headed off to the creek to give paddle boarding a go. 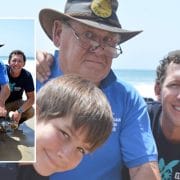 The below article is from the Parks Australia blog, which you can view in it’s original form here.

In  Australia’s Green Cauldron National Landscape, residents are working together to improve the health of coastal ecosystems. In October 2012 we launched the Marine Action Conservation Society (MACS) to educate and inspire young people and bring the Tweed Coast community together in positive projects.

Our first venture is the restoration of Cudgen Creek, a significant area of unique riverbank vegetation that provides habitat for many birds and small mammals and helps stop pollutants from entering the estuary. The estuary is home to ecologically endangered communities of sea grass beds and mangroves, with a diverse range of marine life.

So far 200 trees have been established – most are around half a metre and some are as high as a metre. A further 400 saplings went into the ground this week with the help of Dune Care and local sponsor Holcim.

MACS launched last year when we released a rescued turtle back into the ocean – and honoured the society’s first Eco-Ranger, nine year-old Josh Kook. Josh and his father saved the turtle when they found it floating near Cook Island. The turtle was not diving below the surface and was covered in barnacles and algae – signs it had swallowed plastic bags.

Eco-Rangers take part in a number of environmental activities and earn badges for projects such as tree-planting, coastal clean-ups and marine encounter workshops.

We’re glad to say more people are now recognising the signs of turtles in distress and getting these precious creatures the help they need.

Thanks to all at MACS and our team of committed stakeholders from the Green Cauldron region. Amazing work, everyone! 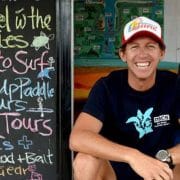 The following article was published by the Tweed Daily News on their website. You can view the original article here.

THERE comes a point in many people’s lives when they decide they’re going to do their damnedest to make a difference.

For Marine Action Conservation Society (MACS) founder Tim Jack Adams, it was the moment he saw an 80-year-old loggerhead turtle floating lamely on the water’s surface near Cook Island.

It had ingested a plastic bag, which was preventing it from diving and condemning it to a slow and painful death. It was the final straw for the Kingscliff resident.

Mr Adams, 31, founded not-for-profit group MACS in early 2012 after the incident, which occurred while he was taking customers of his business -Watersports Guru – out for a dive near the island off Fingal Head.

“For me, that really killed me. It got to me really badly,” he said.

“We had 10 customers on the boat, just about to head into the water to snorkel with these amazing creatures and then you see that, combined with the plastic bags littered around.”

Mr Adams, who was swimming in the Tweed area as soon as he could walk, said from that point in time the founding of MACS was a no-brainer.

The philosophy for MACS is deceptively simple; the group aims to improve coastal ecosystems through conservation, activism, research, education and sustainability.

Always keeping busy, Mr Adams is a Kingscliff Rotarian and member of the town’s business chamber, so he had the necessary clout to gather momentum for MACS’s important cause.

“We work really well with Dunecare, Australian Seabird Rescue and the Rotarians are all great too,” Mr Adams said.

“It only takes one person to make that difference and help out.

“We have so many people helping out now.

“They just come down to the creek or wherever and pick up rubbish and just keep the area as it should be.

“One of our helpers Rayna is always coming out on the creek with her kayak collecting rubbish.

“We have a lot of people involved like that. Some might just help out for a day, but it all helps.”

Impromptu rubbish collection is definitely not the only important goal for Mr Adams and his MACS team.

Working with Tweed schools, MACS has been restoring Cudgen Creek’s riverbanks and marshes to prevent continuous erosion and ensure a healthy eco-balance in the saltwater creek.

More than 200 trees, consisting of banksia and other native species, have been planted by MACS and more are on the way.

“Another short-term goal is to get rid of plastic bags in the Tweed Coast, we already know there’s seven shires doing it, and (endeavouring) to work out a good biodegradable bag.

“The bags are an eyesore around here and if we can get rid of them we’ll all be stoked.”

Work continues on these current goals, as MACS collaborates with Tweed businesses and wider contributors to find a shopping bag which will function like a plastic bag, but will not put marine life at risk.

Mr Adams had no trouble naming a particularly memorable moment among all the activism, citing the official MACS launch day release of a rescued turtle, fittingly dubbed Macs, in October 2012.

“I’ve been looking out for him at Cook Island, because I definitely know what he looks like after he flapped around in my bathtub for three months,” he said with a laugh.

For more information about MACS, or if you’d like to lend a hand, visit http://www.macs-cares.org.

Marine turtles are protected under state and Northern Territory legislation.

Loggerhead turtles occur in coral reefs, bays and estuaries in tropical and warm temperate waters off the coast of Queensland, NT, WA and NSW.

In Australia, there are two breeding populations. The eastern population nests on the southern Great Barrier Reef and adjacent mainland coastal areas. In south-eastern Queensland, mating starts about late October.

They nest from late October until March.

Hatchlings emerge from nests from late December until about April.

Loggerhead turtle carapace has 5 pairs (rarely 6) of large scales on each side (costal scales), colour red-brown to brown and approximately 1.0 metre. 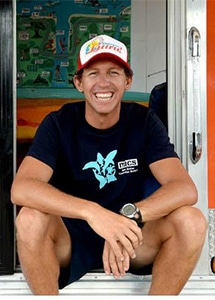